EASTER AT THE LAZY J 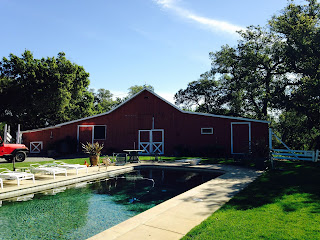 (For those of us alone this Easter Sunday due to government edicts, it’s nice to remember ’twas not always thus).

It started back in 1957. Jim Pop was the stupid city slicker who was willing to pay $1,000 an acre for 12 acres way out in Conn Valley—four miles from town and a mile from the closest neighbors.

Maggie had an aunt, Irene, who was too embarrassed to come out to the Lazy J, for she didn’t want anyone to know that her niece (always the black sheep) lived out past the “dump.”

(In one of life’s weird co-incidences, it turned out that stuffy ol’ aunt Irene Bonetti had dated Al Carpy 40 years earlier, back at Stanford during the 1st War).

And yes, the county dump used to be right out there opposite Big Rock Rd. When the dump moved up to Clover Flats near Calistoga, all they did was cover the old dump with dirt. Wonder how those toxics are doing, today? But I digress.

When Jim Pop’s first grandchild, Liz, was born back in ’75, Easter became a big deal at the Ranch. The Easter Bunny has come a knock, knock, knockin’ at the front door of the ranch almost every year since.

Now our family is no different from yours. When you add in all the cousins, aunts, odd uncles, prodigal sons etc. we have every color of the human rainbow, and most religions. We run the gambit from the selflessly loving, to the dysfunctional psychotic. Whatever can happen to a family, has happened to ours. We’ve had drunks, drug addicts, paranoid schizophrenics, divorces, gender changes—even murders.

Yet, each Easter Sunday, we try to gather–as a family. And like clock work, once the family returns to the ranch after mass and settles down to the traditional Easter Strada breakfast, a distinct rap, rap, rap, can be heard at the front door.

For years, the entire family rushed outside at breakneck speed, yet, only Jim Pop actually caught a glimpse of the Easter Bunny before he disappeared into the barn.

Some of us (mostly the 7 year olds) had indeed seen just the tip of the Easter Bunny’s tail as he scooted under the hay bales.

That Bunny was a cleaver chap. Each year, he gathered up all the eggs the kids had dyed the day before, and hid them all over the ranch. If only that Bunny were smart enough to have hidden the eggs high enough so the dogs couldn’t eat them, the day would have been a resounding success.

In the world of the determined treasure hunters, it makes perfect sense to the youngster that that mystical bunny had hidden the eggs, dyed only hours earlier. To my knowledge, no one has ever queried as to how this takes place. But the Lazy J is a magical place.

Apparently, the Easter Bunny used to stay up till 1am Saturday night until she–er he–finished typing up clues for kids from 7 to 57.

(Yes, we too join in –that is–we try to solve the poems and anagrams that lead to the hidden treasures). Now I can fill in most of the missing words in the poems for the seven year olds, “Find an egg/If you are able/Look real hard/Under the picnic___________. It’s a little more difficult when the clue is for teens or college grads who must find an egg hidden in the Rentebac Omro or the Altetc Ezesuqe. (Not everyone has a “Cattle Squeeze”, so you are forgiven if you don’t immediately recognize the latter clue, but everyone has the former, so I’ll let you suffer as I did}.

There’s no way you would have guessed the Ecutahha Arnsacads; for few ranches have feeding troughs built from used wood from the Gray Gables Hotel (used to be across the street from the grammar school), and named–yes, by Jim Pop for his first daughter in law, Cassandra–hence Chateau Cassandra). When you are a mile from the closest people and 4 miles from town, well, let’s just say it was different growing up on Lazy J.

Each year, the grass is green, the sun,yellow–the wild flowers bloom—and the women wear bonnets, as the men dress to the nines–it is glorious.

After the Hunt, the kids, (once they were ten) could practice driving the Ford alone on the knoll–or take the jeep for trail rides. One year, with her mother unable to watch, I put a 7 year old on my lap as we drove the jeep in search of the cattle. Mostly, we just wanted to honk the horn, and terrorize her city dwelling mom.

Back in the day, we drew “chores” out of the hat (guess who drew “pot washer”) and the meal was a feast with Maggie at the head of the table, distraught that she couldn’t remember where she had hidden the cigarettes she wasn’t supposed to smoke.

Once the kids became college age, the Bunny had different challenges. Now the guns came out and rather than teaching them how to drive, we taught those Big C lettermen and College Co-eds to handle a 12 gauge and shoot skeet.

For years, a dozen or more neighbors would hike the hills and join us for brunch.

Though not this year, soon Jim Pop’s tradition will live on featuring his and Maggie’s great grand children. In 1957 they laughed out loud at the city slicker how paid so much for so little. Why would anyone spend a thousand bucks an acre for 12 acres? Why indeed?