Her Mother Called Her Margaret. We called her Maggie 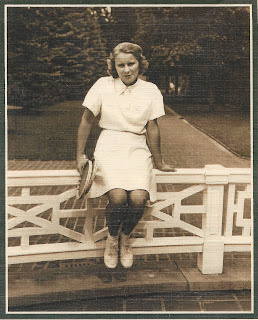 Her mother called her Margaret. Her friends, husband and children, nothing but Maggie. I got to call her “Mom.”  She would have been 98 today.

She grew up in Sacramento. She had been born in Santa Maria where grandfather, J.B. Bonetti was the largest dairy farmer in the area. Her mother, Florence, nicknamed “Beeb” was a bit of a rebel.

Educated at Notre Dame on the peninsula, Beeb defied her father and married the bank teller, Bertrand Jesse. To the proud immigrant father from the Swiss canton of Sameo, marrying a Scot was definitely below his station.   “JP” was not pleased with the nuptials.

Bert (my other grandfather whom I never met) was a feed and grain speculator–– whatever that is. Family legend has it that he was the first man to introduce asparagus into the Delta. He died young. Three weeks after Maggie was married in 1943.

Thanks to the depression and speculative investments, “Beeb”, was now living in an apartment in Sacramento, after having been born in the largest house in Santa Maria.

The Depression helped another Pisano, A. P. Giannini end up with most of Beeb’s father’s wealth as well.

Though he lost most of his land, J. P. left enough for Maggie’s grandmother “Dona” to end her days in comfort in the Fairmont Hotel. It was there, as a little girl, Maggie learned to swim–– in the same pool that became the center piece of the famed Tonga room.

Monthly, Maggie’s mother, “Beeb,” caused a minor stir in the local bank when she would attempt to pay off family debts.  “It’s off the books, Mrs. Jesse,” the bank manager would repeat, monthly—to no avial. She would leave the cash in an envelope and walk out. I never heard what happened to the money. Beeb wasn’t  the only child of a farmer who pawned her own wedding ring during the depression.

Maggie’s childhood might have been unremarkable had not Dick Stevens accidentally seen a 12-year-old girl playing baseball with the guys. As you may know, a tennis  serving motion is the same as throwing a ball. The future Cal tennis coach, and Tom Stow’s assistant (long before Tom, Don Budge’s coach, became the tennis pro at Meadowood and Silverado), Dick agreed to take on Maggie.

Beeb would have stopped this foolish waste of time, but her youngest son was dying of leukemia at age 14, so she dug deep and produced the $27.50 (for 10 lessons) to buy her daughter some happiness.

Her first tennis tourney at the Berkeley tennis club found her up against the number one seed in the first round. Beeb was furious, for the trip to Berkeley was an extravagant waste of money.

The rest is history. Maggie upset the favorite and went on later to win the California State singles and doubles.

In 1938 she and Beeb traveled east, where Maggie won the national 18 and under’s in both doubles and singles–losing only the nationals on grass and costing Bobby Riggs for betting $25 with Jack Kramer on her.  It wasn’t the last time she was to encounter Riggs, the national men’s champion.

Maggie and Tate Coulthard had taken Riggs and his partner at match point in the Pacific Coast Championship tennis mixed doubles finals–– before losing the next day in three sets after the match was called because of darkness.

Yes. She could play.

But mostly she was a competitor.

After losing a game love–40, she was want to say to her male opponent, “Gee, I don’t know what you’ve done to change your serve, but don’t change it back.” End of match! The psyche job always worked.

Master of the nasty drop shot, hers was a serve and volley game at time when women rarely crossed the base line.

She captured another local Sacramento boy, Herb Caen’s attention, and the Sacramenna kid would Pepper his Column references to this other Sacto contemporary.  One of his favorite items was about Maggie’s tennis court at the lazy J.

She named it, of course, “The Warren court.”

Maggie had her own style. She refused to wear sunblock because it wasn’t necessary. “I’m moving all the time on the court. I don’t need it.”

She was a guy’s gal whose sarcastic wit endeared her to all. Her tennis partners ran the gamut from Ernesto Lawrence (co-creator of the Atom bomb) to Mickey Rooney.

In the late 50s, she gave up tennis (there were a few courts in St. Helena) to follow her husband up to lazy J in Conn Valley.

When you live at the end of a mile dirt road, and the pipes freeze during the frosts; the power goes off in the storms; the cars get stuck in the mud; and the neighbors are calling because the cattle are continually breaking through the fences–the Ozzie and Harriet days of the 50’s back in the cozy Piedmont neighborhood where the most daunting task was getting a sitter so you could head out to the Berkeley tennis club—must have looked pretty good.

Though she lasted over 40 years up here, how she ever put up with Jim Pop leaving the city and moving to the Lazy J is beyond me.

She gave up her friends and her life so he could live his life and raise his boys in the country. Instead of shopping with her girlfriends and attending teas, she had to put up with the manure on the boots, the flies from the cattle and horses; the blood and feathers from slaughtering the chickens in the basement; the wail of the peacocks;  bottle feeding the lambs; nursing the animals at all hours of the night even the fear of being trapped by raging fire.

It was called life in the country–where the closest people were a mile away and where the howl of the coyotes let you know you were never alone at night.

She had nothing to complain about though.  Not one of those rattle snakes she killed ever bit her, though they did on occasion get a dog or two.

She moved off the ranch and into town a few years after Jim Pop died.

She didn’t play as much she once did, using a verbal skills and competitive instincts to win bridge rubbers instead of match points.   But she was still Beeb’s daughter–––– proud–– standing tall–– paying for tennis lessons for grandkids and making sure that her grandchildren lived up to the standards of the proud  woman who would let no one pay her debts for her . Yes even the grand children called her Maggie. I got to call her “Mom.”  We loved her