Jackie And “The Chief”

For my parents, Dec. 7 was the seminal date of the Greatest Generation. For today’s generation it is Sept. 11. But for us baby boomers, Nov. 22 will always live in infamy.

On Nov. 22, 1963, President John Fitzgerald Kennedy was assassinated in Dealey Plaza in Dallas.

Outside of the Kennedy family itself, perhaps no man was more personally affected than President Kennedy’s close friend, Chief Justice Earl Warren, the man who spent his Christmases right here in St. Helena, on our ranch out in Conn Valley.

That’s because just days before my grandfather heard the news of the gunshots, he had been dining at the White House as a guest of the president.

He had been sitting next to Mrs. Kennedy, as her husband lifted his glass and toasted the man he so admired, “The Chief.” (We called him Papa Warren.)

As Mrs. Kennedy wrote (in hand) to Papa Warren less than a month after the assassination,

“he (Jack) always loved you so much. He admired you inordinately, long before he was President — and you always sustained him.”

Their affection for one another was mutual — and long-lived. You see, Ike (President Eisenhower) had disagreed vehemently with Papa Warren over the Watkins decision (the one freeing accused Communists who’d been jailed by the House Un-American Activities Committee) — and of course, Brown v. Board of Education, which desegregated public schools. Papa Warren always felt Ike should have thrown the moral weight of the White House behind Brown.

Ike, on the other hand, felt Papa Warren was “the biggest damn fool mistake” he’d ever made (when Warren was appointed to the Supreme Court).

President Kennedy had a different view. That’s why he threw the dinner in the court’s honor.

On Thursday, the president flew to Fort Worth, Texas. Friday he went to Dallas.

While down at the court that fateful Friday, Papa Warren was alerted that the unthinkable was being broadcast on the radio. Papa Warren went home to watch the events unfold on TV. Within hours, he received a call telling him to report to Andrews Air Force Base to join other government officials in a sign of solidarity by greeting the arrival of the new president, the hastily sworn-in former vice president, Lyndon Baines Johnson.

The vice president was flying back to the capital to show the government was still functioning despite the assassination. (Remember, it was the height of the Cold War, and originally, most Americans believed it was Russians, Israelis or Cubans who had pulled the trigger.)

Papa and Mama Warren were expected to pay their respects to the new president. It is unclear whether they knew Mrs. Kennedy was on the plane.

What is clear is that he did not expect to see the woman he’d recently sat next to during dinner, emerge from the plane with her husband’s blood on her hands and dress.

Saturday was a blur. The court was ordered down to the rotunda (where the president lay in state) for a private viewing of the casket. Saturday night around 9 p.m. the phone rang. It was Mrs. Kennedy. Would Papa Warren speak on national TV the next day at the rotunda?

There was a reason she chose him. What could he say?

Speeches were not his long suit. Try as he would, no words came Saturday night. He awoke before dawn Sunday morning, and as the morning stretched on and the right words failed to come, Lee Harvey Oswald was gunned down on national TV by Jack Ruby.

But he did his duty, showed up at the rotunda and spoke briefly and eloquently.

Monday, of course, was the funeral.

The next day, Deputy Attorney General Nicholas Katzenbach and Archibald Cox approached him and said President Johnson needed the man Life magazine had called the “most trusted man in America” to head up a commission.

Citing former Justice Roberts’ involvement in the Roberts Commission on Pearl Harbor, Papa Warren politely declined. He was savvy. He knew the pitfalls.

Thursday LBJ called him over to the White House and as commander in chief essentially ordered him “to don a uniform and pick up a gun in defense of his country.”

“Somehow, that just got to me,” Papa Warren would often say afterward.

The rest is history. Despite what conspiracy fanatics like Oliver Stone and Liberty Lobby loyalists like Jim Garrison tried to do via MTV-style fiction in the movie “JFK,” and the efforts of literally thousands of conspiracy junkies, the boring, mundane fact remains — no credible evidence has surfaced to counter the essential premise of the Warren Commission — that Lee Harvey Oswald pulled the trigger in Dealey Plaza. And that he acted alone.

In fact, new computerized animation (as featured on Peter Jennings’ TV special “Beyond Conspiracy” — Google it) has proved beyond a reasonable doubt that the three bullets came from the sixth floor of the School Book Depository and the bullets’ trajectories were hardly “magic.”

There are lots of half-truths and sexy theories. And yes, information that is now known to the general public was not made available to the Warren Commission.

But as I write this, I look down at two letters from Mrs. Kennedy (entrusted to me by Mama Warren). I reread the words she wrote Dec. 15, 1964. She was giving Papa Warren a picture of the president as a Christmas present:

“None of the people he was closest to have pictures of him,” she writes. “I do not know you that well — though I feel I know you profoundly — but I will always love you because I think you loved President Kennedy.”

In another she wrote:

“He admired you inordinately long before he was President and you always sustained him. I remember him saying one night when he was quite upset about what was happening in Congress, ‘but the Republicans, how can you hope for anything from them. They nominated Dewey and Nixon when they could have had Earl Warren.’”

When he was attorney general of California, Papa Warren’s own father had been the victim of an unsolved murder. He knew, firsthand, the pain inherent in an unsolved crime.

When you add that to the mutual personal affection he and the president had for one another and what occurred those last few days, it is patently obvious that he would have gone to the ends of the earth to find the killer of his friend — and he did. 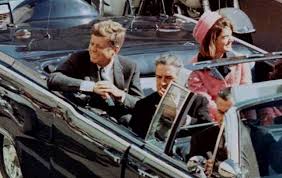